My last book for now: “Kefani”. 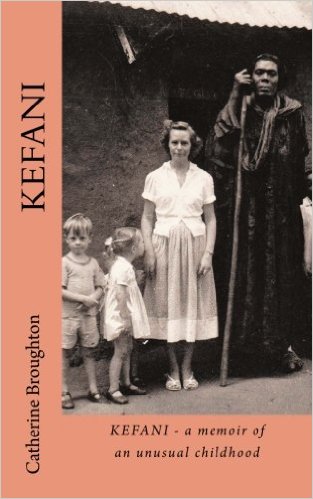 Tags for Kefani will be: #Africa #family #childhood … to give you an idea.  Available in paperback and on Kindle.

The Head Man said a few short words and then indicated to my father that he could start. I didn’t pay much attention to what he was saying, and I leant against him as he spoke.  After a few moments he stopped, picked up pen and paper and did a drawing which I recognized as a man doing a poo in the river.  He held the drawing up. The village Head Man and the nurses watched, unsmiling.

“You drink water from the river, yes ?”

“You see this picture?”

“You understand this picture?”

“You must not do your toilet matters in the river!” he said sternly.

The nurses nodded sagely, but the Head Man looked confused.  A few other villagers had joined our circle and looked at the drawing.  My father held it up in the air.

“What does this picture show ?” he tried again.

I raised my hand as if I was in a classroom.

One or two of the nurses tried to encourage the villagers to explain the picture.  They were fascinated by the crayon, however, and pointed to more paper at my father’s side, some of which was yellow or blue.

Finally one of the women spoke out.

“Dat pik-tcha of man in dem boat,” she announced.

“No,” my father double-checked his drawing.  He was quite good at drawing.  “Anybody else ?”

After a bit more encouraging another villager spoke:

My father threw the picture irritably on to the ground and it was instantly set upon by a couple of children.  He wiped his hands across his forehead and turned to the nurses.

“You have to find a way to explain to them that disease comes from drinking dirty water from the river, that they must dig a pit for their toilet doings …”

A couple of dogs started squabbling by a nearby hut and one of the women threw a stone. One dog yelped and ran away.  I became aware of a weariness in my parents, both drenched in sweat, and I knew they longed to lie down.  Personally, I wanted to jump in to the river, poo or no poo.

More interested in France than Africa ?  Go to www.seasidefrance.com