My experience of Dallas, Texas. 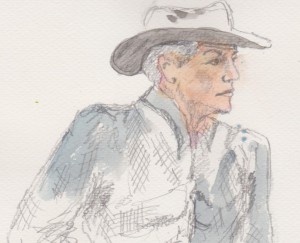 The hotel taxi came to fetch me from the hospital, some 48 hours after being flung, somewhat unceremoniously, off the Dallas to Paris flight because I was running a fever. I was admitted with suspected dengue fever and slept for some 36 hours.  I discharged myself when, feeling a great deal better, I wanted to just get the next flight home.  Bruce had to stay at the hospital to fill in a variety of forms while I hopped in the taxi, keen to escape anybody else calling me honey.  A large Texan taxi lady drove as she chatted as she chatted as she drove … all the way back to the hotel.

Just as we neared our destination she commented that she hoped I’d be feeling better soon and asked what had been wrong with me.  I explained briefly that I’d had a fever and that the flight wouldn’t take me in case it was something infectious, not least because I had just flown in from Cuba.

“Ah, I see ma’am …” she said, nodding sagely, “well, lez jis hope y’all are better real soo … “ and suddenly she swerved on to the side of the road and stopped amid a screeching of brakes.  She swung round to look at me:  “hey !  I hope you ain’t got eee-bowl-eee- ay  ?”

I told her I had been nowhere near West Africa for several years, but this didn’t seem to reassure her.  Cuba was foreign enough as far she was concerned.  When she dropped me off I proffered a tip but, totally unlike most taxi drivers all over the world, she refused it in no uncertain terms, fearful – I expect – of catching Ebola.  I swear I could see her spraying disinfectant around the inside of the cab as she drove away.

More about Catherine Broughton’s adventures are in her book “Travels with a Biro”, Amazon.