Mother rhino and her baby 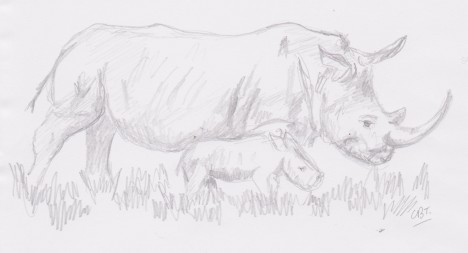 One of the places we stayed was called Mbongo Safari Park.  It was one of the best places we stayed in, with excellent accommodation and a wonderful restaurant. (The restaurants in the Kruger were very basic – fine for a quick meal, but we do like to sip our wine and take our time. My brother, Howard, was with us and he has what the French call “la bouche fine”, ie he knows what he is eating and, like me, won’t eat any old rubbish).

Mbongo is situated north of East London, on the road up to Stutterheim.  We had driven all afternoon, taking the route via Grahamstown (very nice) and cutting across at King William’s Town (grotty) and then Bhisho.  It was already getting dark when we arrived at Mbongo; we were regaled with a delicious meal and collapsed in to exquisite rooms.

In the morning Howard seemed to think that, because I am his sister, I should wash all his shirts, as all good sisters do.  Really ?!  I am sure I have been a Good Sister for a long time and yet I’ve never washed shirts … and I wandered around asking the various cleaners about getting the washing done (there were vast quantities from the three of us, though Howard said he’d wash his own socks “because they smell” – his words) and, having overcome these domestic hurdles, we set off on our safari.

One of the rhinos had disappeared, Archie, our guide, explained.  They had had helicopters out looking for her to no avail, and it was feared she had been killed for her horn.  The total ignorance and crass stupidity of the peoples who truly believe that rhino horn will help them be virile (or whatever it is they think) beggars belief.  It is so dreadful, and I really felt it when we saw the missing rhino’s sister with her baby.  It was amazing to watch.  Archie explained that white rhinos (like this one) will protect their babies from behind, ie push the baby in front of them, whereas a black rhino will go first, making sure the baby follows.

White rhinos are not white.

White rhinos are not white and are really “wide-mouthed” rhinos – the word “wide” having been misused.  Black rhinos are not black; they have a hooked lower lip rather than the flat wide one.

To me the abandoned farm house we came across was as interesting as anything.  Typical colonial architecture, it reminded me so much of houses of my childhood. It was so remote and  I wondered who had lived there, why they left, what had happened … weeds had grown up over the stooep (patio) and part of the roof had gone. Although not big (perhaps four bedrooms) it had once been a lovely house. You could all but hear children playing on what had once been the front lawn. We stood looking at the view for a long time till Archie, peering through his binoculars, said he could see a rhino and wondered if it was the missing one … which it wasn’t.  I was slightly reluctant to leave the old house but we set off again, leaving the house to its ghosts….. and, in the end, the scrub land to the ghost of the rhino.