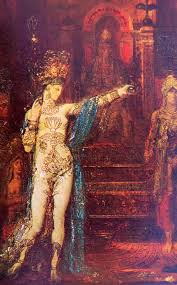 Symbolism runs alongside and interacts with post-impressionism.  Like most of these modern art forms, symbolism started quietly before it was thought of, and carried on after it was finished. It was all largely inter-active. It was not a new idea at all but, unlike the symbolism of the pre-Raphaelites some fifty years earlier, this symbolism was somewhat more convoluted, less clear, and depended largely on literary intellect. Indeed, the movement started as a literary one with poets such as  Stephane Mallarmé or Paul Verlaine, and in England Edith Sitwell, Dylan Thomas and TS Elliott.

In a literary sense it was a direct rebellion against the very formal and strict rules for poetry in French literature, and this movement transcended literary circles in to the world of art.

Symbolists were concerned with the senses, feel and touch and smell, rather than the visual.  Art had already broken away from the confines of traditional painting, but now it entered a new era and encompassed a new ideal in that what the artist shows on his canvas should trigger (in the senses) more than simply something interesting (whether pleasing or not) to the eye.

This picture (abopve) is not just recalling the gruesome story of the dance of Salome, but it is inviting us, the viewer, to feel apprehension, even horror, as we look at the white ghost-like body of Salome, and realize what her hand is almost certainly indicating – the severed head of John the Baptist.  There is a “fused” feel to the light so that we cannot see clearly – in itself a frightening thing.  This painting is a clever mix of post-Impressionism (ie it gives the impression of …) and the very things (symbols) that trigger apprehension in us.   If we peer in to the dark we can just make out the king and two eagle-and-globe symbols which indicates power/power rising above the earth.  We can also make out a sentinel in the obscurity, some steps, the trappings of a palace … but it is unclear and only the dreadful Salome is lit …  The social statement here is about woman’s power over man. 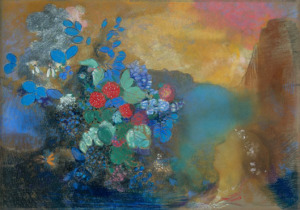 A character from Shakespeare’s “Hamlet”, Orphelia drowns herself in a brook, alongside which run banks thick with flowers.  The symbolism in this picture is clear – the watery look to the picture, the blue flowers, the faceless female … Orphelia had little or no say over her own life and  was totally subject to her father’s wishes, her brother’s and – eventually – her lover’s.  This picture is also a social statement of sorts : look what man can cause woman to do. 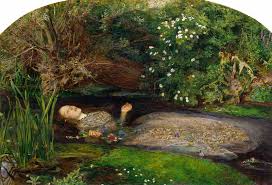 Compare it. however, to Millais’ “Orphelia”, painted some sixty years earlier.  In this picture the symbolism is “obvious”, if you like – each flower is a symbol of love, or lost love, or sadness.  The symbolism of Redon’s Orphelia is not so clear.  It is symbolic symbolism.

As we enter the 20th century the demarcation between the various movements in art circles becomes less clear.  With the exception of well-defined eras such as Art Nouveau, the Arts and Crafts movement and Art Deco, modern art now becomes more diverse and exploratory, to such an extent that it is difficult to give a name to a style.  Indeed, many artists seem to fall between styles.  Pierre Bonnard is one of these – his pictures are usually homely, he does domestic scenes .  This picture is “impressionistic” but Bonnard was not one of the Impressionists.  There is no symbolism here – it is a woman in the bath. No more, no less.  Artists such as Bonnard are referred to as the “Intimists” or the “Nabis”. 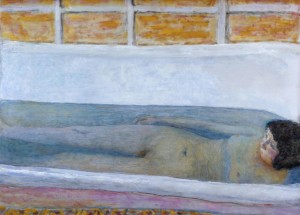 It has been calculated that there are more “artists” alive and painting today (just today) than were alive in the whole of the 3 centuries of the Renaissance.  There is now no mainstream art, there are no rules, no boundaries, and modern art has gone from the sublime to the ridiculous and back again.  The art of the 20th century cannot be categorized as easily as art in previous centuries.  In some ways the very fact that we cannot define 20th century art is, in itself, its definition.  Perhaps in years to come art critics will refer to The Renaissance, the Dark Ages, the pre-Raphaelites, and the 20th Century Indefinables … and so on.

Catherine Broughton is an author – her books are on Amazon.