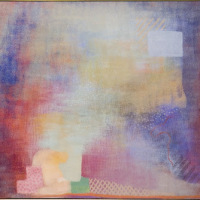 When we use the phrase “modern art” we tend to think of artists like Robert Natkin, an American who died in April of this year.  This picture is called “Farm Street”.  He claimed that a painting meant no more than the materials used on its surface.  I struggle in no uncertain terms to get my head round that kind of claim and I won’t pretend that I want to even try to go there.  Suffice to say that Natkin was famous and an entire world of art critics found his work wonderful, so that’s fine.

This is one I prefer, by a French artist called Jean Mermoz-Portez (1901-1936).  He was a pilot by trade and was part-Brazilian. 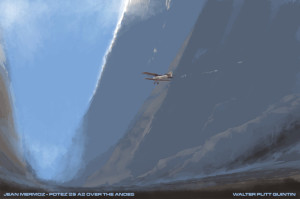 However the term “modern art” does not refer to this kind of picture and is a kind of title, like The Renaissance, or the Age of the Enlightenment or (medieval) Illuminations – or whatever – and applies specifically to a genre of art that started to evolve just after the French Impressionists in France (roughly 1870-1890) and that covers the years from around 1860 to around 1970.

Within the time-line we are talking about are several other movements in art.  Several people have asked me if I will be talking about people like Edward Hopper, or David Hockney or Art Deco or Art Nouveau – but no, these are stages in art which have their own titles, they have their own unique style, they are recognizable to us for what they are and – equally importantly – they are durable for they are still much-loved to this day.  Certainly, they fit in to the time frame we are discussing (1860-1970) but they have their own headings and stand alone with that.

It also needs to be recognized that a lot of art, through the centuries, was considered modern.  The art of the Enlightenment was a “new” art in its time, after centuries of paintings depicting really only things like Biblical scenes or royalty.  This picture, called Experiment on a Bird, 1768, was done by Joseph Wright (1734-1797) and was considered avant-garde, odd, innovative, a bit crazy, truly amazing  … in its time. 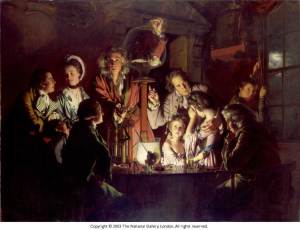 However, till the Impressionists came along, art followed what to us are recognizable “rules”.  The artist had to be able to draw.  People needed to be in proportion, artists had discovered how to give depth to their paintings and they produced oeuvres that were recognisable to others for what they were – whether a scene from the bible or a portrait of a king or a group of people around a table. 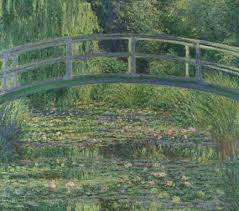 Monet – the most famous Impressionist

With the end of the Impressionists (roughly 1890) came the end of the artistic belief in “truth” in what they represented in their paintings.  Painters now felt that we see what means something to us, that each subject portrayed is in space and time a different representation for each of us.  Everything around us was changing – this was 1890 and the telephone had been invented (1876), radio inventions started in the 1880s (Hughes & Hertz) with Marconi hot on their heels in 1907.  Trains had been running regularly since the 1820s and cars began to appear on the road.  Industrialization, the good and the bad, was everywhere, and the world was rapidly changing.

Artists now struggled to portray what they saw for themselves in a multi-dimensional sense.  They no longer wanted to produce paintings that were simply pleasing to the eye of the general public.  They sought a different level of consciousness and a different application to the eye of the on-looker.  They wanted something way beyond the technically correctly executed portrayal of the subject.  They wanted their art to trigger emotion at one level or another. 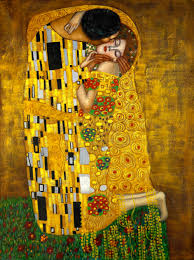 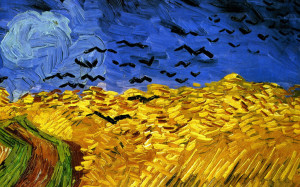 Van Gogh (1853 -1890) on the one hand produced this kind of painting (the Wheat Field) with a kind of naïve brushwork, almost as though he was in a rush to do something – anything! – and was slapping the paint on just for the hell of it ….  He drew/painted a great many depictions of field workers, fields of corn or wheat, lavender, farmlands, farm workers.  Whether we like them or not, his paintings are rich, textured, emotive – and recognisable!  He is saying “look at this brilliant summer day!” and he wants us to hear the birds and feel the sun and smell the  corn. 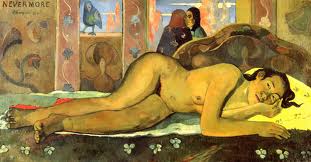 My favourite post-Impressionist artist is Paul Gauguin (1848 – 1903).  This painting  is “Nevermore” – that is the English title and it reflects Edgar Alan Poe’s epic poem “The Raven”, but here Gauguin has reduced the raven to a mere ornament in the background, and has introduced raw human emotion as the main subject, as the native girl (Gauguin, who was born and raised in France, lived and died in French Polynesia) listens, disgruntled, to the conversation going on behind her; although she is naked and on a bed, the picture is not erotic. The girl is lumpy, grumpy, unattractive, and Gauguin is telling us that it is not just the raven* that spoils love.  Gauguin has successfully portrayed unhappy romance.

“Nevermore”.  Gauguin has also used a bit of symbolism in this picture – a lily for love, an orchid for sex, and clover, none of which has four leaves.  His use of yellow and brown gives the picture an insipid, dissatisfied look; none of the colours indicate love or gentleness; the blue sky is far away and neither of the 2 people in the background are looking in to the picture.

Interested in France ?  To book your holiday visit seasidefrance.com. Self-catering properties not far from La Rochelle