Cubism changed the world of art for good.  It was the representation of the pinnacle and also of the lowest point of modern art.   The two most famous cubists are Picasso and Georges Braque.  People have been both intrigued and scandalized by Picasso’s work, which went through various periods that he called “The Blue Period” (1901-1904, when he was new to Paris and very poor,  or the “Pink” period (as his paintings started to sell and life got better) and so on.  Art is an emotional medium for Picasso and, crucially, must reflect his feelings.  Picasso’s work had a profound, and very important, effect on later art.  The women in this picture, presumably prostitutes, are hideous.  The picture, as one can well imagine, shocked the general public, but it does contain a force and a statement.  Picasso was afraid of women and needed to always dominate and control them.  He was a man with a very strong personality and his contrary moods and double-edged persona shows in these jagged representations. 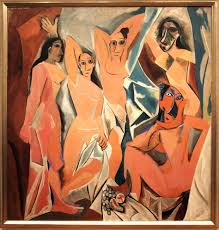 Les Demoiselles d’Avignon, Picasso 1907.  Pablo Picasso (1881-1973) was a Spaniard , born in Malaga,  and lived and died in France. He was an extremely talented artist, as shown by his early works which bear little resemblance to his later paintings.  His early work was traditional and classical; as he grew older and explored more diverse art forms, he could be described as a  Proto-cubist, ie his work opened the doors for Cubism.  He was also a talented sculptor, printmaker, poet, and stage designer. 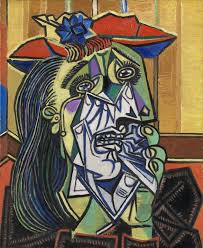 Weeping Woman, Picasso 1937.  This was a portrait of Dora, one of Picasso’s mistresses.  Although I dislike the picture I can see very clearly how Picasso has portrayed the furious tears of a woman scorned.

The original is in black, white and varying shades of grey, but I seem to have uploaded a coloured version.  Never mind.  It is about war, for this was the time of the Spanish Civil War, about which Picasso felt understandably very strongly. 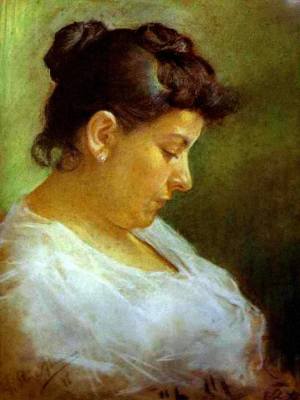 You would never think it, but this is also by Picasso.  It is a portrait of his mother, done when he was young and studying art and long before he launched himself in to the mad new world of modern art. 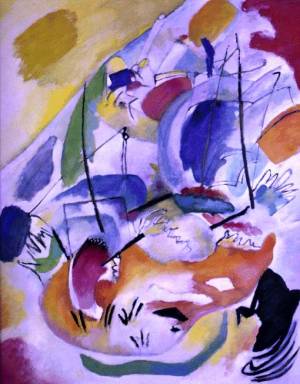 Sea Battle, Kandinsky 1913.  Vasilly Kandinsky (1866 – 1944) was Russian but lived much of his professional life in Germany.  By trade he was a lawyer and a brilliant man.  He was the first true abstract artist and cannot as such be firmly categorized as either a Fauvist, a Colourist or an Expressionist.  His work transcended many movements.  He believed firmly in a relationship between colour and shape.  Much of his work was destroyed by the Nazi party who labelled it “degenerate”.  Despite what, to many of us, are inane splotches which are difficult to understand, Kandinsky produced some very talented and more formal art in his youth.

Abstraction celebrated the art of children and native peoples.  It had no precise artistic programme but was all about spiritual light, innocence of animals and children, theosophy (God and wisdom), enlightenment of the soul. 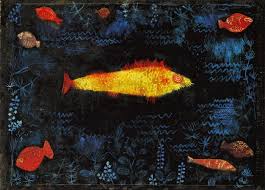 Paul Klee (1879-1940), Swiss.  Klee’s work was hardly ever wholly abstract.  It was a melange of the abstract and of recognizable things, which is probably why it is enduring and loved to this day.  On the other hand his art was not realistic, as he gave his shapes and forms a bizarre dimension within the setting of each picture.  Art critics have said they can hear music within his pictures, and I can see what they mean.  Indeed, he was a talented musician.  There is a kind of humour to his pictures and he advocated the use of colour in all its hues, intense or otherwise.  Klee’s pictures were often very small (this one no bigger than a tea tray).  Klee, who had moved to Germany as an adult, fell under the surveillance of the Nazis and fled back to Switzerland.  His paintings became dour, sinister, and full of sorrow. 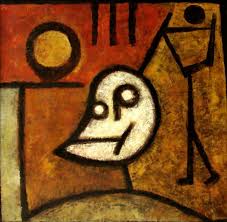 This is one Klee did after he fled back to Switzerland.  It is called death and if you look at the skull it spells out the word TOD – the German for dead.

The abstract was not a new idea.  Ancient bowls, textiles and furnishings regularly had abstract designs on them but these designs had never been presented as a force, or a painting if you like, in their own right.  Now, with the “liberation” artists had acquired, abstract art became the new theme to explore, and there was an explosion, particularly in Russia, of colours and shapes that were portrayed as being totally independent of nature; they were just there in their own right, for the sheer delight of using them.  Use of colour in geometry became an art form in its own right. 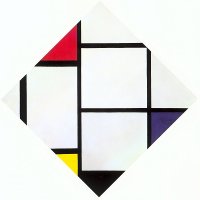 Piet Mondrian – 1872-1944.  Mondrian was a pure abtract artist.  Colour and shape for it’s own sake.  Because it is there.  He is not trying to convey a message.  He is just saying “see these colours, see these shapes”.  No more, no less.  Mondrian was a Dutchman, born in Amsterdam, but he left Europe for the USA at the outbreak of WWII.  This picture was done in 1925.

The art of the fantastic is generally known as Surrealism.  Or more precisely, Surrelism is a large part of the art of the Fantastic.  This evolved largely as a reaction to the senseless atrocities of WWI and the knowledge that, as predicted by Maréchal Foch at the signing of the Armistice, more war was just round the corner.  The modern art energy that had dominated the art world was, to an extent, lost.  A new, bizarre, sinister, often sickly art was beginning to squeeze itself out in to the world and artists became introspective, concerned with their dreams, and the irrational fantasies of man was now explored through painting.

The art of the fantastic can be sub-divided in to three main sections: Dada art, which was born towards the end of WWI in New York and filtered through to Switzerland (meaning both in German and in French simply “hobby”) and which concentrated on the “ridiculous” within art.  It was non-art. Naughty of me, but I haven’t bothered to look up who this “artist” was.  I’m afraid I don’t know and I don’t care.  I can understand, however, the need to express the ridiculous after the horrors millions had been through, but I dislike it so much that I remain completely ignorant about it.  It was just a style, mercifully short-lived.

Another style within the Fantastic was the Metaphysical

Carlo Carra (1881-1966) was an Italian.  You can see how the real surrealist paintings sort-of slipped out of this style:- 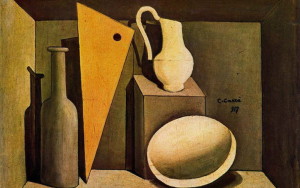 And then, of course, the Surrealists:

Salvador Dali – the most famous Surrealist of all.  1930.

I feel at this stage I have introduced how modern art came about.  We could carry on discussing it forever, and there are so many facets to it that it would make an interesting talk.  But art now starts to enter the “indefineable” era.  It has travelled way way beyond the realms of what was recognizable for many hundreds of years. It has in some ways gone back to the cave-paintings of thousands of years earlier, and at the same time it has leapt forward to eras yet to come.  No holes are barred.  There are by now so many artists that it is impossible to even try to cover them; there are so many styles that trying to define them becomes a chore that is not necessary.  Each oeuvre can be ranked according to the eye of the beholder; what one sees as a fantastic representation of feeling, is seen by another as a great mass of splodge with no meaning.  And it doesn’t matter.  In some ways that is the beauty of it: it doesn’t matter.

Catherine Broughton is an author. Her books are available from Amazon.