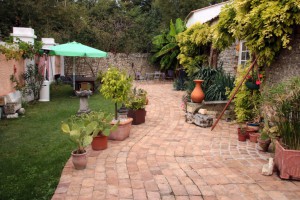 The story of Le Logis.

Because of the big old fireplace, which is original, we assumed for several years that this used to be a house, but it was not – it was a barn, dating to around 1700.  We think the fireplace was installed because the ostler, or other worker, may well have slept in with the animals during the winter.  The fireplace would also have been used for cooking for the cremaillere, ie the iron hook for holding pots, was still swinging incongruously there when we found it.   “Pendre la cremaillere” (hanging up the hook)  in French means a house-warming.

What is now the bedroom with en-suite bathroom was a back-kitchen serving the chateau. Indeed, the recess where the big bathroom mirror sits is because it was once part of a bread oven.  The other side of the bread oven can be seen in cottage 6.  Unhappily it was too derelict to warrant rescuing. We found marble slabs in this section, used for making goats’ cheese, and several huge old iron pots.   The roof had completely gone from there when we bought it, and there was even a tree growing more-or-less where the bed is.  We knocked both doorways through on that side.  The upstairs where the 2 little bedrooms are didn’t exist except for a stone pigeon-loft – you can see the pigeon-holes either side of the fireplace.  It would have been common to eat them. 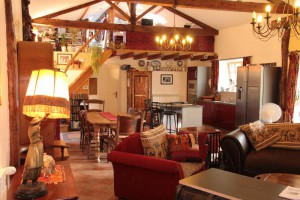 We also knocked the doorway through to the ground floor bedroom on the other side. For many years that room was a workshop.

The floors throughout were beaten mud, except for a section in front of the fireplace which had cobbles.

The Chateau itself, which was served by the cottages and outbuildings, was built in 1848 on the site of a far older and larger property which was burnt to the ground during the French Revolution (1789-1799).  Many of the buildings on the cottage side pre-date the Chateau by 100 years and more.  The land stretched as far as the eye could see but was reduced to little more than what is enclosed within the walls today. 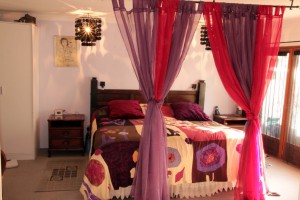 Catherine Broughton is an author. Order her books from Amazon.