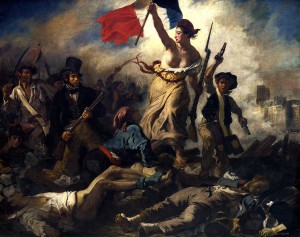 Marianne as depicted by Delacroix (1798 – 1863), violent, charging in to battle, bare-breasted (insinuates Amazons), walking on the dead, insouciante despite horror and destruction all around her.

There are several symbols of France (as indeed there are for most countries) and the most commonly seen one is Marianne.  It seems to be sometimes referred to as the Marianne (la Marianne), I suppose because it is a symbol and not a person.   Created during the French Revolution (1789-1799), she symbolizes the Republic of France and the French slogan “liberte, fraternite, egalite“.  Actually there were loads of similar symbols at the time, but Marianne survives.

How Marianne got her name

There has been, over the years, some discussion as to how she got her name. Nobody knows, but I assume it is because it evokes the name Mary (ie mother of God), because the traditional symbols of power at the time of the French Revolution had been Mercury and Minerva, both starting with the letter M, and because so many of the war-cries of the revolutionaries were feminine nouns: la liberte, la raison, la France, la Republique … and so on.

There is a contradiction there, however, because the longed for liberte, fraternite and egalite applied only to men, and land-owning men at that.  With the best will in the world I cannot imagine that the French leaders of the time thought to choose a female symbol in order to appease the female population!

When Marianne came about she was depicted as gentle, determined, strong but feminine, wanting justice but an end to the appalling bloodshed.  As the Revolution continued, however, and the priorities of those in positions of power shifted, so the image of Marianne shifted, and she became violent and blood-thirsty. 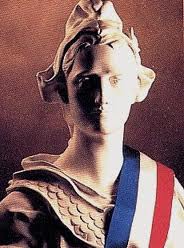 Marianne is always depicted in the little cap (a Phrygian cap, ie with the top pulled forwards, originating in antiquity in the Balkan peninsular.  It may be that it was confused with the cap slaves were sometimes depicted wearing and thus was supposed to illustrate a yearning for freedom.  Indeed, it is often called a “liberty” cap.)   She also always wears the tricolor, the colours of the French post-revolution flag. 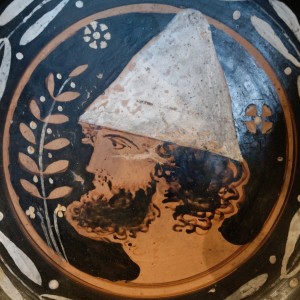 Slave of ancient Greece wearing a pileus – I expect the top bit flopped forwards!  Probably originates from the Greek town of Pylos.

Other symbols of France

– the rooster: France was called Gaul in Roman times and the Latin for a rooster was gallos

– the tricolor flag: red, white and blue were the colours of the Revolution

– the phrase “liberte, fraternite, egalite“, ideals that were based on the existing English, Prussian and American systems

– La Marseillaise: the rousing national anthem. It is terribly blood-thirsty but great fun to sing !

– the French coat of arms: a mixture of a crown, fleur de lys and sometimes a couple of dophins

– the Great Seal of France: a female figure of justice on which the Statue of Liberty is based 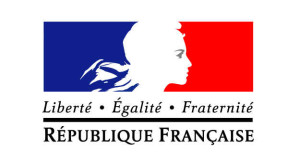 Marianne as we know her today

links to other items about the French Revolution in the “Snippets of French History” series:-

Snippets of French history: the storming of the Bastille 1789. Part 3.