In the souk, Marrakesh, Morocco 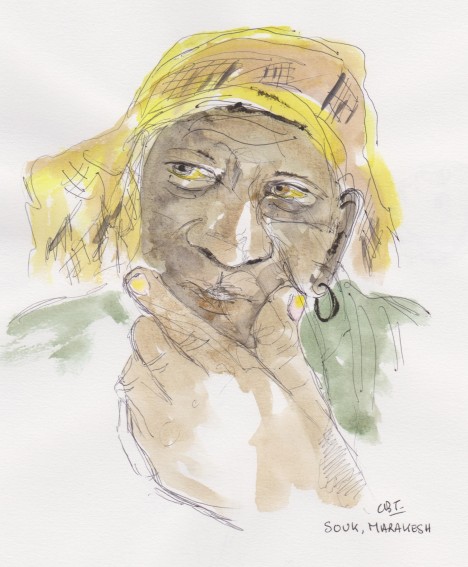 This amazing old crone (there is no other way to say it) had a stall at the edge of the souk, opposite where we sat down for a coffee.  It was impossible to judge how old she was, quite possibly not very old at all, for these people often live very tough lives and age quickly.  We had been over to her stall to look at her wares, which appeared to be bits of dead I-dread-to-think.  Certainly the smell drove us away promptly.  The woman herself was extremely loud, despite the pensive look in this quick sketch.  Yes, her hands were big like that – huge hands that had done a great deal of hard work.  They were more like a man’s hands and, indeed, her general features were, and for a mad moment I wondered if it really was a man … and perhaps it was.  She did a great deal of shouting, angry shouting, at an older man nearby.  He in turn just went back and forth, back and forth, between an old timber cart drawn by a moped and the back of a small shoe repair shop.  He ignored her completely.

We watched for a while, drank our coffee (though I think mine was mint tea) and then set off around the souk, avoiding the old crone, and mesmerized by the brilliance of the colours, the cacaphony of sound and the exotic mixture of scents and smells.  All around Arab boys gathered, all trying to persuade us that we needed them as a guide.  We had taken one of these boys on, years earlier, in Tangiers.  His name, he told us, was Mustafa Coca-cola.  I sometimes remember him and wonder where he is now – no doubt running around with tourists in a souk just like this one.

Click below for “Saying Nothing,” a novel set in Spain:-

If you haven’t yet been to Morocco:-