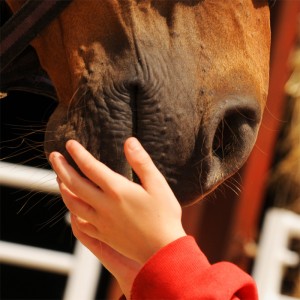 Greatwood is the longest standing racehorse welfare charity in the UK and the only organisation that uses ex-racehorses to educate disadvantaged children and young adults. We are also the only racehorse welfare charity that does not have criteria for entry; Greatwood will never turn away a horse at risk; in danger of neglect; or suffering. Greatwood operates a ‘Cycle of Rehabilitation and Change’: horses helping young people ⟳ young people helping horses; our educational programmes impact the individual through: Improved confidence; a sense of empowerment: bettercommunication skills; development of self-concept; enhanced impulse control; restoration of trust; a healthier perspective on life through understanding and developing empathy; anxiety reduction; a decreased sense of isolation; restored self-acceptance; much improved social skills; harnessing and developing a healthy level of assertiveness; and learning respect. Greatwood is also a Member of The National Equine Welfare Council and one of the Retraining of Racehorses’ recognised rehoming centres.

It costs the charity over £350,000 per annum to keep all the horses at Greatwood and a further £34 per person, per day for each young person to attend an educational programme, a total of over £233,000 per year; we receive no direct government or local authority funding to operate our non-accredited education programmes or the accredited Get Going Programme – our innovative intensive course which develops key workplace skills forNEETS (not in employment, education or training), who potentially have struggled at school; have been in care; are long-term unemployed; or have been in trouble with the law or through the probation system.  We raise funds via grants, charity events, fund raising initiatives and the generous support of the general public, our fund-raising efforts are on-going throughout the year. 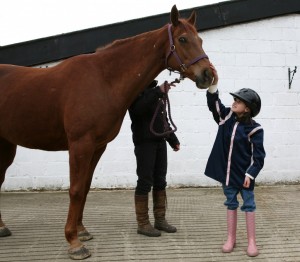 The ex-racehorses that are cared for at Greatwood may have suffered neglect several years after their retirement from racing; often because they have been passed from owner to owner and have fallen into a downward spiral of neglect. Greatwood uses them as vehicles for teaching, with direct parallels being drawn between the experiences of these horses and the students attending the courses. This is particularly pertinent to those children who may have come from the care system and find it difficult to trust or respect others; as well as engaging in nurturing, caring relationships.

Greatwood holds several fundraising events throughout the year; we have just had our annual Race Day at Newbury Racecourse (1st March), which was a roaring success thanks to Catherine’s support – raising a whopping £60,000.

An International League for the Protection of Horses (ILPH) survey revealed that out of the 5,000 or so racehorses that leave racing every year some 400 are at risk. We joined a committee in 1999 to discuss with the then British Horseracing Board to put a scheme in place whereby racing could be seen to be responsible for the fate of those racehorses that fall upon hard times.

In the early 1990’s , and as life long lovers of horseracing, having owned, ridden and bred, Michael and I were becoming increasingly concerned as to the fate of racehorses when their racing days were over. As the years went by our reputation grew in rescuing and rehoming racehorses the work for which we funded ourselves for about six years.

A very good friend, a pioneer of horse welfare and Vice President of International League for the Protection Horses persuaded us to start a charity so that we could carry on the work we had started. Greatwood was founded in 1998. We went on to rescue substantial numbers of horses which for whatever reason had fallen upon hard times; a horse dumped in a scrap yard outside Birmingham, a horse shut in a stable for years, a horse that had been abandoned in a field having been won at cards in a pub.

These are just some of the examples of our rescue work. It should be pointed out that we concentrate upon welfare of the horse at all times never turning away a horse at risk. A significant number of horses need rescuing and although our ultimate aim is to re-home our horses, it must be understood that it takes us a lot longer to re-home a rescue case rather than purely the type of horse that has just been retired from racing.

Greatwood was a beautiful old Devon farm from which we derived the name for the charity. It was on one particular occasion in Devon that the idea for Horse Power began to take shape. We had been asked if we could help a little girl who had become so withdrawn that she had stopped speaking. When she visited us, we had just rescued a horse that was in a poor way. Over the following few weeks we witnessed the most extraordinary transformation in this child. There was an interaction between the vulnerable child and the rescued racehorse that built both of their confidences up to such an extent that before too long a bubbly little girl would arrive chattering gaily, and a recovering horse would whicker at the sound of her voice.

As our work was needed more and more, we decided to move, and found a dairy farm near Marlborough in Wiltshire. That, in itself, was a huge upheaval, the removal of dozens of horses, geese, hens, sheep and goats made the actual house move a piece of cake.

Once we had settled in Wiltshire we were determined to provide an opportunity for children with special educational needs to learn life skills and emotional literacy through interaction with rescued former racehorses.

In 2014, 21 years since we began, we have successfully re-homed many rescued racehorses and are now happy to report that our work with children has gone from strength to strength and over 3000 children have been educated at Greatwood. Of course, none of this could have been achieved without the substantial help from our staff, friends and supporters.