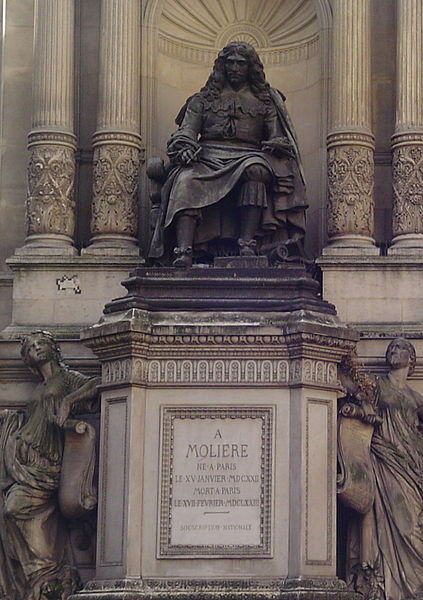 I must say I don’t go over board about writers of this era, either in France or in Britain.  I’m not very keen on the heavily-flowered vocabulary or the heady innuendo of the Grand Siecle and, although I daresay the quips and double-entendres are very clever, they always leave me feeling somewhat blank.

For the best part of a century, starting with the rule of Henri IV (d.1610) through to the reign of Louis XIV (the “Sun King”), France was considered to be the cultural centre of the world.  It lacked the finesse of the Italian dramatic works from the days of the Valois, but emerged with a genre of its own and, by the time Moliere was in the king’s court, it had evolved in the public eye to a general penchant for tragi-comedy that, though many considered it shocking, rapidly became hugely popular.

Writing poetry, plays, essays, music and songs was the pass-time of the nobles and religious people, certainly of the educated classes.  In fact it was considered to be such a “correct” and gentlemanly thing to do with one’s time, particularly with regard to the wooing of the fairer sex, that at any given time there were two and a half thousand poets/writers/playwrights/composers in France for a literate population of only ten or twenty thousand people.   The accent was on what nowadays we would call foppishness, with a specific set of manners, dress code, things a gentleman had to say (or not), a specific way of kissing a lady’s hand, bowing, dancing … and so on.  Salons and literary academies flourished.

Moliere was no exception.  He was born Jean-Baptiste Poquelin * (1622-1673)  in to a wealthy, if not noble, family. Through well-placed friends  he rapidly made acquaintainces at Court and thus stepped his way up the appropriate ladders to get the king’s attention.  In fact he became godfather to the king’s first-born son – quite an acheivement for a non-noble.  He led the Troupe du Roi for many years and was the official author of Court entertainment.

Like Shakespeare a few hundred miles away (and a hundred years earlier) Moliere invented words of his own when necessary.  We have many Shakespearian words in our language, though the only Molierian (if I may use that?) word that I am aware of is la galere which is still used today meaning something uncomfortable and difficult. 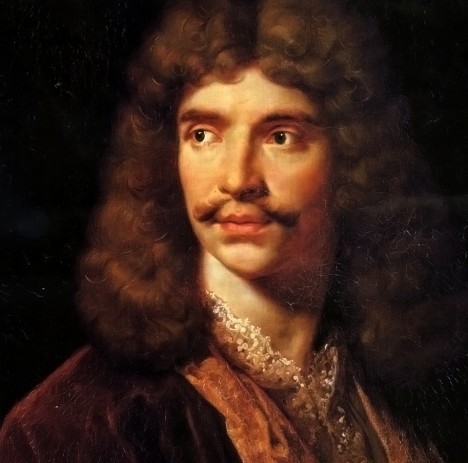 I think perhaps what sets him apart from his contempories (Racine, Corneille, Lully and Quinault being his close associates) is that Moliere was a risk-taker.  His style of comedy, of tragedy, or tragi-comedy contained accustations and jokes about the hypocrisy of the church (the Roman Catholic church loathed him) and about matters such as the lack of education for women.  In an era of sharp-wit, where not only was it simply good to have a sharp wit (as it is today), it was actually the fashion to have a sharp wit, Moliere’s plays were inflammatory in places and the audience was alert to every phrase and every verse, ready to pick out the hilarious or the offensive.  And it was done on purpose, both by the playwright and by his audience.

I read Le Malade Imaginaire about a zillion years ago and remember little of it and I also read Le Tartuffe at around the same time. The only quote I have is from Le Tartuffe where he says “pire eau que l’eau qui dort” which is the French equivalent of “still waters run deep”.  I love the way it sounds. Say it quickly : pire eau que l’eau qui dort, pire-eau-que-l’eau-qui-dort!!  Great isn’t it ?

* it is not clear why Moliere changed his name from Poquelin, but it is perhaps because he spent a day or two in prison because of debts during his early years and he was concerned that it would stand in the way of his social climbing. Certainly the two happened at around the same time

Catherine Broughton is a novelist. Her books are on Amazon and Kindle, or can be ordered from most leading book stores and libraries.  More about Catherine Broughton, to include her entertaining blogs, sketches and stories from around the world, on http://turquoisemoon.co.uk

Click below for “French Sand” by Catherine Broughton, a novel set in the South Pacific:-