French History: The Hundred Years’ War in a nutshell. 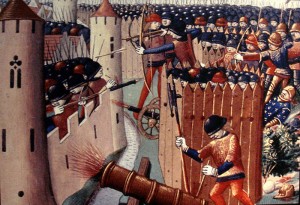 The Hundred Years’ War is the name given by modern historians to a series of wars that saw vicious conflict between England and France over a period of 116 years, from 1337-1453.   There were fundamentally three main wars, the Edwardian War, the Caroline War and the Lancastrian War, with short periods of relative peace between them.

To understand the gist of how it started we need to go back to 1066 when William the Conqueror, Duke of Normandy, invaded England.  He became King of England – and thence his sons and their sons after him – as well as retaining his title of Duke of Normandy.  This meant that the English crown owned Normandy.

Then a hundred years later in 1152, the English king ,Henry II, married Eleanor of Aquitaine.  This meant that the English crown now owned large areas of France, ie all of Normandy and all of Aquitaine, almost a third of the country.   As a political politesse, the English monarchy paid homage to the king of France.  This was all fine and it trundled along like this for a couple of hundred years till Edward III came to the English throne.

Edward III of England was the closest living relative to the late French king, Charles VI.  Under English law, and in the normal course of events, Edward of England should have become king of France – or so he thought at any rate.  The French, however, did not agree because his relation to the late king was via his mother and, under French monarchial law, one could not inherit via the female line – called Salic law.  As far as the French were concerned the late king’s cousin, Phillippe VI, now the new king of France, had a stronger claim to the French throne.

And so the Hundred Years’ War started.  The first part (1337-1360) was called the Edwardian War for obvious reasons.   The Caroline War (1369-1389) was named after the French king who succeed Phillippe, Charles V. (Caroline = carlovigian = Charles) and finally the Lancastrian War, (1415-1453 under Henry V of England, was so named because Henry was from the House of Lancaster.

This constant warfare  brought about two major changes: England lost all her lands in France (though she did gain Calais) and it saw the dying out of the feudal system of peasantry battling for their lords, to be replaced with army-like trained forces that had not been seen since Roman times.   Monarchs of England carried on claiming their right to the French crown till 1800 and conflict remained between to the two countries all that time.