As we approach the centenary of the First World War, I thought it would be interesting to have a look at the roles of some of the French women during that time.  Women combatants, sometimes called she-soldiers, were far more common that one would think, though we always refer to the lads, our boys, our sons and brothers …  Throughout history women have regularly fought alongside their men folk, admittedly not in great numbers, but they were there.

Émilienne Moreau was only 16 when World War I started.  She was starting a teaching career as the German invasion of the north of France began during October 1914. In December of the same year, her father died whilst the German soldiers were housed in their village.

In September of that year, whilst Scottish soldiers of the Black Watch counter-attacked her village, 17 year-old Émilienne went to meet them and gave them the precise location of the German positions. Thanks to this information, the allies were able to capture the German position, with very few casualties. Afterwards Émilienne organised a first aid post in her house with the help of a Scottish doctor, to take care of the wounded.

To save a British soldier who was under enemy fire in the village, she went out with explosives and succeeded, with the help of some British soldiers, in forcing the Germans to flee from their position in the neighboring house. Later on, she shot two German soldiers though a closed wooden door. Eventually, the village was under the sole control of the allies.

She was awarded the Croix de guerre 1914-1918 with an army acknowledgement given directly by Marshal Ferdinand Foch and the Croix du Combattant by the French Army. Moreover, the British army awarded her the Military Medal, the Royal Red Cross (first class) and the Venerable Order of Saint John. This last award is rarely given to a woman. She was personally invited to meet the President of the French Republic Raymond Poincaré and later the King of the United Kingdom of Great Britain and Ireland, George V.

After the war, she returned to the north of France and married  the socialist activist Just Evrard. In 1934, she became the General Secretary of the women’s socialist movement of her area. 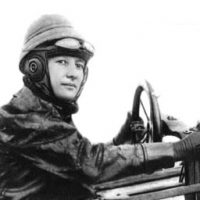 Marie Marvingt (20 February 1875 – 14 December 1963) was a French woman athlete, mountaineer, aviator and journalist, all most unusual for her era. She won many prizes for her sporting achievements including those of swimming, cycling, mountain climbing, winter sports, ballooning, flying, riding, gymnastics, athletics, rifle shooting and fencing. She was the first woman to climb many of the peaks in the French and Swiss Alps. She was a record-breaking balloonist, an aviator and during World War I became the first woman to fly missions during conflict as a pilot.

She was also a qualified surgical nurse, was the first trained and certified Flight Nurse in the world, and worked for the establishment of air ambulance services throughout the world. According to a French source, it was M. de Château-Thierry de Beaumanoir who, in 1903, named Marie Marvingt as “La fiancée du danger.” She herself used the epithet for an autobiographical publication in 1948. It is also included on the commemorative plaque on the façade of the house where she lived at 8 Place de la Carrière, Nancy.