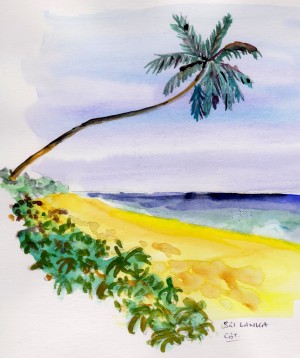 Greg … what is it ? Why this? What are you trying to tell me? She understood then that she must examine the Caprice more closely, and that she must also find out if Greg used any other boats in the area, or if he had any connection with other boats. For the first time she wished she hadn’t sold the Caprice, though at the time it had seemed the only sensible thing to do. She would also have to go over to Goat Island. That would be easy enough for boat trips and boat hire were all readily available. Goat Island was the least visited of the islands, however, for it was rocky and barren and had little of the idyllic South Pacific atoll image of heaven that the other islands boasted.

Mat’s voice broke in to her thoughts. He used her Christian name, as young people tended to, and it had shocked her slightly at first. Gingerly she stepped forwards off the track in to the brambles, placing each foot carefully down. There were several sharp cacti-like plants which Mat had hacked back a little here and there. She advanced slowly. Tizzy remained by the car.

As she approached she saw that Mat had shoved to one side a large timber panel that had been resting against the façade of the shelter. Behind was the same as the rest of the shelter – sun-dried and brittle planks of wood, upright, treated with some kind of blackish liquid that still smelt faintly of kerosene. What was important, however, was that the area of timber that had not been protected from the weather was virtually the same as the area that had been behind the panel.

She pointed this out to Mat.

“That means somebody put it here fairly recently,” she said.

“I thought there might be a door behind,” explained Mat.

How long does timber take to look weather-beaten? Melanie wondered. Perhaps she was reading fictitious clues in to something that wasn’t even there. She told Mat about the tyre marks she had seen.

“Mmmm …” he hesitated, “could be anything … a tourist taking photos, for instance.”

“Yes – of course. This area is well known for old army stuff – you know, military training and manoeuvres..”

“I thought that was Mont d’Or?”

“Yes, it is – but it’s the same neck of the woods. A tourist could quite plausibly come up here too.”

Mat now started to work his way around the shelter, looking for a door. He peered in between the planks. Melanie did likewise. Inside it was dark with arrows of yellow light on one side where the sun slanted in through the planks. They couldn’t see anything.

“Seems to be empty,” said Mat.

He carried on round the shelter. He was drenched in sweat and covered in little bits of twig or dust. He had cut himself very slightly on the cheek. Melanie remained where she was and looked closely at the building. A couple of corrugated sheets made the roof, laid over the top of the planks and held down against the wind with rocks. There appeared to be no windows or openings.

“There’s no door,” said Mat, coming back round the side.

“I think access must be via the roof,” Melanie pointed upwards. “Those rocks would be easy for a strong man to move, and –“ she now noticed a couple of small notches in the timber “ – and one could perhaps climb up quite quickly. It’s not very high.”

“Sherlock Homes eat your heart out!” laughed Mat, placing a foot up on the first notch.

A couple of quick agile movements and Mat was up on the roof.

“You’re right!” he called down to her. “There’s another smaller sheet of corrugated up here – a kind of hatch.”

Melanie could hear scratching noises. Mat was out of sight.

“What are you doing?” she called.

“Opening the hatch! It’s not locked. Ah! Here we are!”

There was a moment of silence and soon Mat reappeared at the side of the roof.

“Nothing,” he said. He sounded disappointed. “Nothing. Empty. Just dirt and a few boulders, that’s all.”

Mat celebrated his birthday with a small barbeque party one lunch-time at the Commission. He was short of money and everybody brought a bottle and some food – an American idea, that seemed a good one. There were only five people there, but Mat had received presents from his home and was lively and happy. He had got a girl-friend tucked away somewhere, Melanie assumed, but he was very secretive about her. Probably embarrassed. The other three people also worked at the Commission – a husband and wife team, both scientists of sorts, and one of the secretaries, a rather silly flighty little woman whom Melanie, despite herself, found irritating.

“Are you going out tonight?” asked Melanie.

He threw a couple off chicken pieces on to the barbeque and they spat and sizzled. He was also cooking onions.

“Should be good,” he continues, “there are lots of people about right now – the club will be lively.”

A few tourists were around and the streets of Noumea were busier than usual. The tourists, many of whom were American, were a welcome sight for since the assassination of Kennedy the previous year, there had been a frightening drop in the quantity of Americans about. Melanie always noticed them, for it was one thing Greg had doubtless been right about – tourists and tourism were soon going to be big business.

The following day Mat came over to Melanie in her office.

“I’ve been thinking,” she said. “The port is important. Greg was there all the time. He worked there. He lived boats. People round there would know him – of him – I think it is worth looking in to.”

“You want me to go down to the port?” he asked. “What kind of questions should I ask? Who should I talk to?”

“Really – I don’t know. Play it by ear. Try to chat to people, see if you can find out anything. Really, anything. Might be useful.”

Mat set off and Melanie returned home. She told him to meet her there.

“I don’t want to hang around the Commission for you to come back,” she said “- will that be all right? Can you find your way up to my place?”

At home, she pottered about, seeing to odd small jobs and enjoying the slow pace of life. Periodically she looked up over the patio in case Mat was on his way, and found herself impatient for him to turn up. At last she saw his tall thin figure emerge at the bend at the bottom of the road. He strode rapidly up the hill and through her garden, raising a hand in salute when he saw her waiting there.

“Well?” asked Melanie when Mat returned, “did you find anything?”

Mat slumped down in to the wicker patio chair and pulled his sandals off. He spread his toes, red from the heat, out over the cool stone tiles. He wiped the back of his hand over his forehead.

“French Sand” by Catherine Broughton is available on Amazon.