Every picture tells a story – on how to read art. Part One. 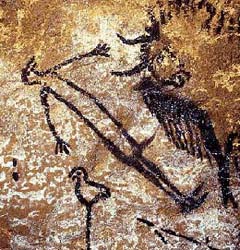 Every picture tells a story – on how to read art.  Notes made for an AFA talk.

Until really very recently paintings were done for a specific purpose: to relate an historic event, to portray a person, to indicate political or religious affiliations or whatever.  A picture hanging on the wall just because it is nice to look at was all but unheard of till the eighteenth century.  Pictures did indeed decorate, but they also told a story, and in the days of largely illiterate populations these stories were crucial.

near Santander in northern Spain, date back to 15 000 years BC.  We do not understand their meaning, but we can be fairly sure that it was not just to pretty-up the interior of the cave.  It may be that the portrayals of huge bison were believed to bring luck to the hunters, for example, or the portrayal of animals and men was thought to perpetuate life on earth.  We don’t know.  In this picture, which is from Lascaux in France, we can see a man (it clearly is a man and not a woman) drawn in a bizarre stick-like style.  The bison, who has been disembowelled (I can’t fit the entire picture in to the space) is shown as a massive, powerful animal.  There is a broken lance on one side, and a strange bird on a pole – perhaps a good-luck item or something used in the hunt.  The cave men of the time would have understood this picture – utterly.  Perhaps the man was portrayed in this ineffectual way because it was important that the gods knew that man understood he was inferior … ?  Even in this relatively simple picture, we could speculate ….

which pre-dates ancient Egyptian art, is all but lost to us.  The ancient Africans painted on wood and on leather, and this has almost totally disappeared.

For the ancient Egyptians,

4000 years BC, life after death (at least for the wealthy) was paramount, and a lot of their art was devoted to depicting the pleasure of life – hunting, eating, drinking – after death.  Their art was representational, ie the craftsmen & artist followed set patterns, clearly mostly from memory. That is why, to the uninitiated, much of their art work looks identical, and certainly very similar. In tomb reliefs or painted straight on to the walls (fresco seco) an important person was always depicted as larger than the others, slaves were drawn as tiny figures, their faces were in profile while their bodies generally faced out.  To us, they look out-of-proportion, but to those who looked at the pictures it was obvious.  Ancient Egyptian art is not concerned with the visual from the point of view of changing external variations, but in as accurate a representation as possible of whatever the painting was about – so, the Pharaoh is big, because he is the important figure in the work, the slaves are small because they are unimportant.

Ancient Egyptian art can, arguably, be called diagrams rather than drawings. Indeed, there was a strict code for drawing, and this was followed with care.  Accurate repetition was ensured by a strict geometrical grid system and the artist would draw out a grid before he began work – even feet were drawn a specific distance apart.

Because of this grid/code, the meanings of the pictures were clear to everybody. They could “read” them.