Every picture tells a story – on how to read art. Part 5. 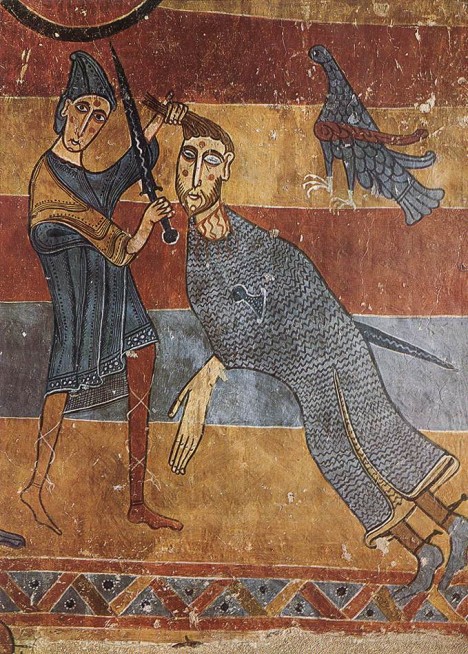 The thousand-year period from around 400 AD to 1400 AD is referred to as the Dark Ages in western Europe.  Despite the pejorative implication, this was not a period in history that was totally without art.  The Roman Empire had fallen, ancient Greece was long gone and Byzantium was fading at the other side of Europe.  Meanwhile western Europe was a melting pot of ideas and arts, with influences from the Romans and Byzantium, and also from the Germanic and Celtic cultures approaching from the north.

However, it is true that gone are the exquisite works of the ancient Greeks and the Romans, to be replaced with a far more raw form of art.  Much of the art of the time seems to us to be out-of-proportion and naïve but, like the ancient Egyptians, the concern was more for putting over the message than anything else.

So, Christianity was spreading.  It was being taught.  Boys of noble families were tutored and their lessons were enlivened by the odd illustration or two, often in a book and often in the form of a fresco.  Oddly enough, these boys were not necessarily taught to read and write (King Charlemagne, one of the greatest scholars of the Dark Ages, could neither read nor write) but more to know the Bible and to speak Latin and Greek.

This illustration shows a fresco at Tahull in Spain, done sometime around 1100 AD, and illustrating the story of David and Goliath.  David is shown as a skinny boy with a wide-eyed wondrous look on this face.  He clasps Goliath by the hair in readiness to chop off his head. Goliath is shown as almost double the size of David.  Above is the body of one of Goliath’s men, and behind David is one of David’s men, looking on in admiration.  The bird represents peace and the word of God.  The background is in red and yellow: yellow represents renewal and purity (though off-white is cowardice) and red represents royalty and power. The blue represents the presence of God, Heavenly grace. The message is clear: if you are a good boy, God will help you vanquish all adversaries.