Did you know … ? Snippets of French culture.

A bistro in France was – traditionally – a simple small restaurant where you can get a basic no-frills meal fairly cheaply in Paris. 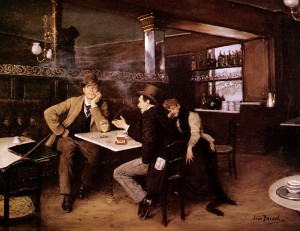 As is the way with everything, this has changed over recent years, and quite a lot of restaurants will call themselves a bistro when in fact they are quite a smart restaurant.  You can find a bistro in almost any French town and in other countries too.

The word bistro originated with the Russian occupation of Paris in 1814.  The Russian for “quick” is “bystro”.  These were places where the Russian officers could get a cheap, quick meal.

French linguists do not agree as to the origin of the word, however, because there are two other words from which it could originate:

Bistrouille, meaning coffee with an expensive liqueur in it.

I find it doubtful that the bistro originated from either of those, however.  A place that sold cheap nasty alcohol would hardly have  given itself a name.  And as the bistro was intended for a quick and inexpensive meal, it seems equally unlikely that the clients sat and had an expensive liqueur-coffee there.

The word gite comes from the verb giser, ie to lie down.  On grave-stones you often find the inscription “ci-git Pierre Loti” (or whoever) meaning “here lies so-and-so”.  It can also mean to shelter something – the lawnmower git in the shed.  However it is a very old-fashioned word and I have never heard it used.  There is a circonflex accent on the letter i, by the way.

Traditonally gites are supposed to be simple farmhouse-type accomodation within the grounds of the owner’s house.  The gites provide basic but clean accomodation for a small rent. 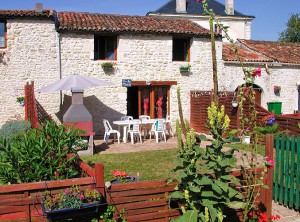 one of our own gites: simple, rural and traditional

Nowadays people will refer to their gite when it is not a gite at all – it is a villa, or a cottage, even a flat – and the word has become largely meaningless.

These used to horrify me when we first went to France.  Logically, there is no reason we shouldn’t eat horse any more than we eat cow or sheep. but there is undeniably something horrid about eating a horse.

It was legalized in France in 1871 during the Prussian seige of Paris when the starving citizens were forced to eat anything and everything. From there it gained momentum and, being considerably cheaper and more tender than beef it soon became the meat for the poor.

Nowadays, although you can buy horse meat easily enough, there are relatively few boucher chevaline. 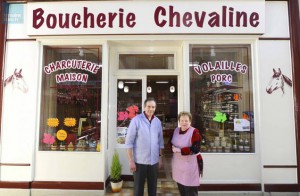 Q: what is the difference between a notaire and God ?

A: God never thinks he is a notaire

The French notaire has largely the same qualifications as a lawyer, but he does not attend court in legal matters.  He is in charge of the papers and certificates relating to the purchase/sale of property, wills and testaments etc.  He does not deal with litigeous matters, though any acts and papers he draws up are legally binding.  Traditionally he has the status of a demi-god, though this almost religious attitude to him/her has quietened down in recent years. 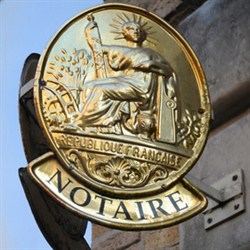 It is odd that the French, so advanced in most ways, still have these archaic loos. Turkey, OK. Greece, OK. But France?   Actually, France was very late in sorting out its loo problems and when we first came here in 1989 many houses had no indoor loos, and many had no loo at all. I know, because I ran an estate agency for several years and saw many, many houses. 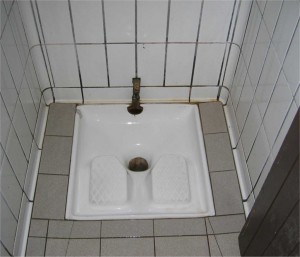 Truly, no exaggeration, I saw one house where the loo was at the foot of the stairs – presumably so that the loo user could open the front door without getting up; I saw one house with the loo positioned next to the cooker, presumably so that one could stir the soup at the same time. Double loos outdoors were still in use. How friendly. Even “educated” people seemed behind the times – we know a Yoga teacher and her Maths teacher husband whose loo, even today, is out in the garage.

Yet in England our old Victorian semis had a loo – the “casi” (from the Spanish word “casita”: little house, brought back from Spain by UK mercenary soldiers during the Spanish Civil War) – down at the end of the garden. Our very first UK house, built in 1880 and bought in 1979 when we were young newly-weds, had a perfectly decent (and original) loo just outside the back door. But upon arriving here in France even our Chateau had no indoor loo … and the solitary outdoor one had not been installed till 1969. Odd, isn’t it?

In fact I don’t mind a Loo de la Longue Droppe. It is very good for your thigh muscles. You do need Wellies, however. You need to be sprightly too. You need to be able to kick the flush button (yes, kick), step out of the way, unlock the door and get out all in one swift movement.

Perhaps they should be called Le Loo de Feet Washing instead.

Interested in France?  Book your next holiday! Full details on www.seasidefrance.com