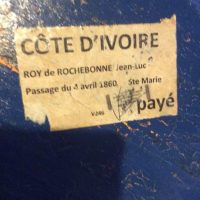 In the Chateau there is an old trunk with an equally old Cote d’Ivoire shipping tag glued to it.  It made me want to look up about the French in Africa.

Like so many places, trade was the first point of contact between “the white man” and his black counterpart.  Ships from Europe called in to the various ports in east Africa en route for the orient, and the first records of European-African trade date to the mid- 1400s.  Trade was mainly for gold, pepper and ivory.

Ivory Coast was so named by the French and the Portuguese because of the trade in ivory. There was also Gold Coast, Grain Coast and Slave Coast and several others.  Only Ivory Coast has retained the name.

the coat of arms for Ivory Coast features – inevitably! – an elephant

The first French settlers in west Africa arrived as early as the mid-1440s. Interestingly, one of the first things they tried to do was to ban slavery.  The French presence in west Africa, along with the Portuguese and the Dutch, was based on trade and there was never any storming-in and conquering in any real sense.  Gradually Christian missions were established, and fortified settlements established for traders.  Exploration of the interior of Africa was not government policy, but depended more on individual enterprise.

Ivory Coast comprised several kingdoms, each with their own chief.  By the mid-1800s the French had established treaties with the chiefs, putting the whole area under French protection. The French paid a sort-of rent to the chiefs for use of their land.  Misunderstandings were constant but is was fundamentally peaceful, and inter-tribal warfare was greatly reduced. 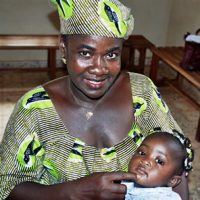 beautiful people ! French is the official language. There are 78 languages in all, but schooling is in French as well as all official matters

Things started to fall apart when in 1880 a local chief, named Samori Ture, wanted to conquer all his neighbouring lands and re-establish slavery. This forced the French, who had sworn to protect the people of Ivory Coast, in to military action.  To make matters worse, other chiefs tried to play the French and Samori Ture off against each other.  Some bloodshed was inevitable, but was nothing like the mass murders (black against black) that followed after independence (1960) during two civil wars (2002 and 2011).

The French brought with them engineering, medicine, education and trade. People are very quick to criticise the European presence in Africa, but Europeans did a great deal of good on the African continent.  Their policies were based on association and assimilation – ie. the Ivoirians should keep their own culture in whichever way they wanted, providing it didn’t go against French culture – slavery for example.  Chiefs were taxed to help finance public works (dams, roads, hospitals) but they saw this as a “fine” rather than as helping to pay for the necessary elements that make a nation tick. (We came across this in Belize when the locals people objected to paying for a dustbin collection: they saw it as a fine and not a fee). 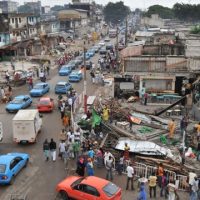 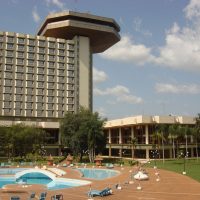 Old and new worlds combine. Yamoussoukro and Abidjan are the two capital cities of Ivory Coast.

Ivory Coast became independent from France in 1960, but where other African countries drove the Europeans out, Ivoirians encouraged the French to stay – to prosper they needed technicians and managers, teachers and  medics.   Ivory Coast, under efficient guidance, became one of the most prosperous countries in Africa and remains one of the top ten economically – there are 54 countries in Africa.

Interestingly, the Rochebonne trunk is dated 1860, ie before Ivory Coast was officially “French”.  I have spent some time trying to work out who “Jean-Luc Roy de Rochebonne” was, and what he was doing in Ivory Coast, but have drawn a blank. 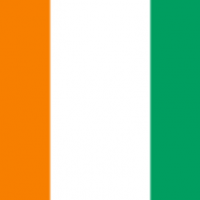 looks so like the Irish flag!  The Irish one is green-white-orange, however.

Interested in France ?  Book your holiday in the Charente Maritime 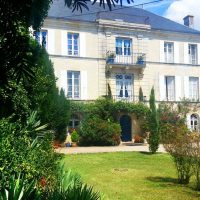