Child with a deformed foot in Central America 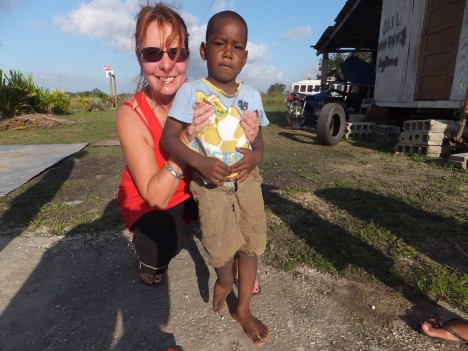 But he is growing up with a severe handicap.

We met Emmanuel and his dad when we broke down on the Belmopan road earlier this year. We have a 4-wheel drive Mitsubishi Montero that we keep in Belize and, having been on a long drive around Mexico and Guatamala, and the car being ten years old, it started to make bizarre noises. As they do.

We limped along till we saw a hand-painted sign propped up against a shack. “Car mechanic” said the sign. That sounds about right, we said. David, the mechanic, emerged from the wooden shack, wiping his oily hands on a rag – as mechanics do.
Bruce (my husband) and David peered under the car and under the bonnet and between them declared that the pulley on the end of the crank-shaft had come off. Double dutch to me, but Bruce is brilliant at any kind of problem like this, and David was a mechanic …. I sat down and played with David’s two little boys, one of which was Emmanuel, blissfully oblivious to the seriousness of the car problem, or to the fact that Bruce had got more tools in the back of the car than David had in his workshop.

The hours ticked by. I drew pictures of lions and tigers and elephants for the boys, played a make-shift and half-forgotten game of hop-scotch and eventually, accompanied by a rotund black auntie who appeared out of nowhere, I walked the two miles to a shop where I stocked up with water, soft drinks and various goodies. It is quite difficult to get goodies that haven’t gone stale in Belize and, true to form, the biscuits were soft and the crisps like slithers of cardboard. Auntie and I hitched a ride back. The two little boys were delighted with the goodies. And the hours ticked on.

Emmanuel got around quite well by using his good knee as a kind of foot, ie he scuttled around on his bad foot, which was a bit longer than his good leg as far as the knee … if you follow what I mean. He had no pain and moved with ease. However, you could already see his little spine twisted over to one side to accommodate the difference in height on one side of his body, and this bizarre scuttling is fine while he is at home with his mum and dad …. But when he starts school, and when he starts dating, it will be a different matter altogether.

Belize does have a National Health system. It is quite good in many areas in that almost everybody gets free health care, which can sometimes include dental and eye care. Operations are usually about 75% free. The problem arises with access to care, for some people live in very remote areas and have no transport, and the country has no money.

Some weeks later, the car repaired, we drove back to see Emmanuel. His parents explained that they had talked to a doctor about Emmanuel’s foot and that there was indeed an operation for him.. but there were two problems. One, they couldn’t pay the 25% and the other – more importantly – they didn’t want their son to be “cut” – their word. But these operations are almost always successful, I told them. Emmanuel will be able to walk in a normal way. No, no, we don’t want him “cut” they repeated. I tried to reassure them – I will pay the difference, my brother is an orthopaedic surgeon in London and will advise, I’ll make sure Emmanuel gets the best care, what about when he is a teenager …. But no, we don’t want him “cut” they repeated.

A US charity is now sending an envoy to go to see Emmanuel’s parents. This is an area of poverty and lack of education where it is so difficult to help …. For we are dealing with a closed-mindedness and a fear that neither money nor good will can alter. A UK or US parent wouldn’t hesitate a second, yet for these parents the fear of the unknown overrides everything …

Click below to order your copy of “The Man with Green Fingers”, a novel set in Cyprus:-